"Solve by Christmas" by Amber Schamel ... and a GIVEAWAY! 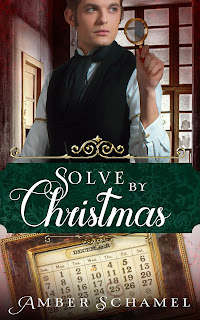 Amber Schamel has graciously offered to give away an electronic copy of this new release. You can enter by using the Rafflecopter link at the end of the post. (Giveaway ends October 19, 2017. If you are the randomly chosen winner, I'll contact you and pass on your information.)

The Message Behind Solve by Christmas...

When the story idea for my first-ever mystery popped into my head, I knew it would be tricky. But I didn’t know just HOW tricky it would be. Mostly because it deals with a very sensitive issue. Suicide and depression. I felt God leading me to explore this issue through one of the most palatable venues possible. A fiction novel. As I researched and prayed, and then began to write, one thing rose to the surface. As Christians, we have the key to unlock the prison cell of depression. We have hope. We have the chance at a change of nature and a better future. We have freedom from guilt through the blood of Jesus Christ.

In my novel, my main character, detective Jasper Hollock, is faced with a challenge of dissuading one of those dearest to him from committing suicide. As I wrote, I didn’t know how the book would end, or exactly how Jasper would solve Mr. Rudin’s case. There were several times during the first and second draft that I just laid my computer aside and hit my knees. “God, I don’t know how to write this!” Some of those scenes were SO hard to write. Having battled depression and suicidal thoughts in the past, I know how strong it can be and how hard it is to turn someone’s thought process around.

But as I prayerfully worked through to ‘the end,’ I began to see that God doesn’t always work as tidy as we’d like Him to, but He does pull through. We DO have the weapons to defeat depression and suicide. Because Christ has the answer to every question. If it’s worthlessness and lack of love …Christ is love, and He says we’re worth dying for. If it’s guilt … Christ’s blood cleanses that in a supernatural way nothing else can touch. If it’s grief … Christ is there to weep with us as He did with Mary and Martha but also to help us pick up the pieces and start anew. If it’s failure … His mercies are new every morning.

All it takes is a personal, real touch from Jesus Christ. I’ve never been the same. And He will do the same for you, your friend, your loved one, or anyone struggling against these deadly mindsets.

What advice would you give my character who is contemplating suicide? Leave us a comment to get your name in the drawing for an ebook copy of Solve by Christmas! 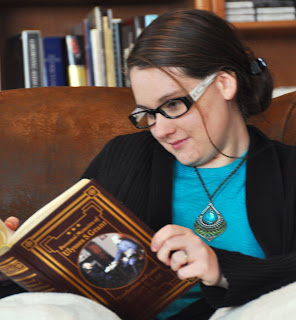 Amber Schamel writes riveting stories that bring HIStory to life. She has a passion for history, books, and her Savior. This combination results in what her readers call "historical fiction at its finest." A homeschool graduate from a family of  2 children, Amber found her calling early in life. First published at age 21, she has continued to hone her craft and has been awarded the 2017 CSPA Book of the Year Award in Historical Fiction. Between ministry, family, and working in their family-owned businesses, Amber loves to connect with readers and hang out on Goodreads with other bookish peoples. Find her on the Stitches Thru Time blog or on any of the major social media sites.  Amber is an active member of American Christian Fiction Writers.

Where you can find Amber online...


a Rafflecopter giveaway
Posted by Leslie at 4:00 AM