"Hidden Among the Stars" by Melanie Dobson ... and a GIVEAWAY! 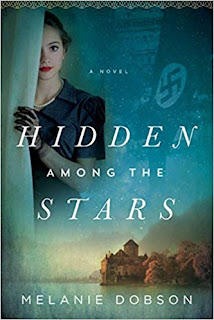 Melanie is here to share a bit about her latest release, Hidden Among the Stars.  Her publisher has offered to give away a hard copy of the book (US ONLY).  You can enter by using the Rafflecopter link at the end of the post. (Giveaway ends October 5, 2018. If you are the randomly chosen winner, I'll contact you.)  Here's Melanie...

Ownerless treasure—that’s what Nazis called the jewelry, artwork, and coins they stole from Jewish people. They began plundering this “ownerless” treasure before World War II, and as the war progressed, they stored these valuable items in caves, mines, and castles across Europe.

Fifteen years ago, my husband and I visited the alpine lake district in Austria called the Salzkammergut where the Nazi Party intended to build their Fourth Reich. In the 1940s, Nazi officials brought crates of gold, millions in counterfeit and real money, artwork, jewels, and other treasure to store in this alpine fortress.

Near the end of the war, as Nazi officials fled south through Austria, they began hiding what they’d stolen. Some of it was distributed up into the mountains, hidden in abandoned castles or salt mines. Some of it was buried in gardens or on farmland. Some of it was tossed into the deep mountain lakes.

The Devil’s Dustbin—that’s what locals call this region where the Nazis abandoned so many of their things. After years of careful calculation, record-keeping, and storage, the Nazi officials dumped much of their stolen treasure across these Austrian Alps, planning to come back for it later.

During the research for my new novel, Hidden Among the Stars, I found an article from the 1950s that said the material loss of the Austrian Jewry—almost two hundred thousand people—was estimated at more than one billion dollars. Sadly, only about five thousand Jewish Austrians returned to reclaim their property after the war. And it wasn’t easy to find.

Some of this Nazi plunder was kept by people who found it on their property. Some of it left the country with officers and soldiers who thought looting was their victory reward. Jewelry, coins, artwork, silver teacups with saucers—an assortment of items were shipped back to the United States after the war.

During our trip to the Salzkammergut, Jon and I spent several days on a lake called Hallstatt, surrounded by a fortress of mountains. Because of the lake’s four-hundred-foot depth and the many hiding places in its underwater caves, forests, and shifting sands, divers continue finding World War II artifacts today, almost eighty years after the war. Some believe there’s still a treasure trove hidden far below the depth range of a scuba diver.

Along Lake Hallstatt’s shore is a medieval castle with rusty turrets, boarded windows, and an old boathouse resting in the water like a felled log. Intrigued, Jon and I boated across the lake to see Schloss Grub, and the match of inspiration ignited my mind as I wondered about its story. Who had lived here during the war? And had the Nazis hidden any of their stolen treasure on the estate?

I began writing in my journal that night, hoping that one day a novel would emerge from the ashes of this castle’s story. As the years passed—and access to online material grew—I was able to find out more about Schloss Grub. During World War II, I discovered, the estate was used as a Hitler Youth camp, but my imagination had to fill in many gaps about what happened there after Austria was annexed into Nazi Germany. And about what happened to the treasure—if the legend was true—that had been hidden in this region’s castles and lakes.

Set in a fictional castle, Hidden Among the Stars is a time-slip story about treasure lost along the shores of Lake Hallstatt. Some of my characters are searching for treasure stolen from the Jewish people; others are looking for Jewish heirlooms hidden by well-meaning Austrians who thought their neighbors would return after the war.

But more than just a treasure hunt, Hidden Among the Stars is a mystery about finding something even more valuable than heirlooms or artwork. I won’t tell you whether or not my characters find the treasure, but I can tell you that my protagonists find exactly what they need. And they learn that while they may lose their material possessions to the Nazis, may even lose their lives, they can never lose the legacy of a treasure stored deep in their hearts.

Q:  What inspired you to write Hidden Among the Stars? Can you tell us about the research that went into writing this novel?
A:  My husband and I backpacked across Europe to celebrate our fifth wedding anniversary, and our favorite stop was the ancient town and alpine lake called Hallstatt. On this trip, we discovered that this region in Austria’s Alps is often called the “Devil’s Dustbin” because the Nazis retreated through here near the end of World War II, throwing all sorts of valuable items in the lakes. Because of the water’s depth and the many hiding places in the underwater forests, caves, and shifting sands, people continue searching for World War II artifacts here today. After learning this history, I began digging through mounds of old books and interviews to create my own story about two people—characters in the past and present—searching for a lost treasure in Lake Hallstatt.

Q:  You explore fear, evil, and God’s sovereignty in your novel. How do you hope readers might relate these themes to their own lives?
A:  When we experience tragedy, many of us ask where God is in the midst of this pain. Both the past and contemporary characters in Hidden Among the Stars struggle to understand where God was during the Holocaust and where God is today when people are hurting. As I wrote this story, I was reminded that this life we’re living is a battle, the world around us a battlefield, and as readers step into the fictional journey, I hope they are reminded that God doesn’t run away when they are suffering. He is right in the midst of their pain, and in the end, no matter what evil does in attempt to destroy this world, the peace and love and holiness of Christ will prevail.

Q:  What role does faith play in this story?
A:  Faith is integral to Hidden Among the Stars. As I wrote this book, I dug deep into a question that has haunted me for years: how can a loving God allow so much pain in our world? I wrestled with this question personally as my characters in both the contemporary and historical portions struggled to find an answer. I hope their conclusions will encourage and inspire readers in their own journey.

Q:  Why did you decide to feature children’s literature as part of this story?
A:  At first, I wanted to counter the heaviness of the past scenes with the life and fun of children’s books, but the more I wrote, I was reminded of some of the poignant and provoking themes in great children’s literature. Many children’s books are about confronting fear, and this novel features two books written in the shadow of World War II that helped both children and adults overcome fear.

Q:  What are some future projects you’re working on?
A:  I just returned from the Netherlands and am finishing a time-slip novel based on an incredible rescue mission that happened in Amsterdam during World War II. The heart of this story is about identity—who we are in Christ, no matter the circumstances—and I hope it will capture again the power of seemingly ordinary people doing extraordinary things to fight evil and rescue those in need.

Thanks, Melanie. I'm sure my readers will enjoy getting to know a bit more about your book and future projects.

I've read other books by Melanie Dobson, so I had high hopes for this book, and I wasn't disappointed. (Plus, I look books of this genre!)

The book blends current day, small-town life with Austria at the beginning of the German occupation. Dobson weaves a beautiful dual-timeline story that explores one of the most evil times in history. The present-day characters try to right some of the wrongs of the past, and it all starts with a children's book that could be the key to unlocking the past.

Dobson's novel is well-researched, so it educates the reader along with entertaining them. It highlights some of the sacrifices people made, as well as the suffering they endured. There is romance angle, as well, but it is not the key focus (and I was happy about that). the book is a bit longer than some, but every word was well-utilize. Many books of this genre focus on concentration camps, whereas this one focuses on the possessions the Jews owned and what happened to them. Dobson has crafted a tale that is the perfect blend of history, mystery, and romance, making it one of my favorite reads of 2018 so far.

Disclaimer: I received a complimentary copy from the publisher/NetGalley, but I wasn't required to leave a positive review. 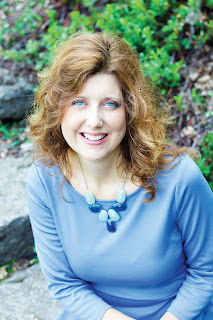 Writing fiction is Melanie Dobson’s excuse to explore abandoned houses, travel to unique places, and spend hours reading old books and journals. The award-winning author of almost twenty books, Melanie enjoys stitching together both time-slip and historical novels including Hidden Among the Stars, Chateau of Secrets, and Catching the Wind. More information about Melanie’s journey is available at http://www.melaniedobson.com/.