"The Hidden Side" by Heidi Chiavaroli ... and a GIVEAWAY! 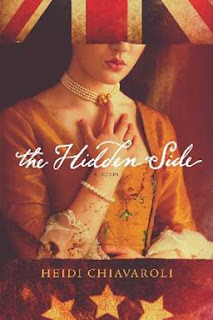 Heidi is here to share a bit about her latest release, The Hidden Side.  She's offered to give away a hard copy of the book (US ONLY).  You can enter by using the Rafflecopter link at the end of the post. (Giveaway ends September 7, 2018. If you are the randomly chosen winner, I'll contact you.)  Here's Heidi...

The inspiration behind The Hidden Side...

As is often the case, my ideas usually begin with research. I was searching for a true-to-life historical figure from the American Revolution that could inspire a new story when I stumbled upon Agent 355, a woman who played an important part in General George Washington's most successful spy ring, a woman whose identity we still don't know for certain. That was enough to get my imagination going! Before long, I had a solid historical story down--a story about a woman seeking to redeem the wrong done for her fiance, infamous spy Nathan Hale. A story about a woman hiding behind a facade that could not only ruin every relationship she has, but could put her life in peril, as well. A story about a woman who finds herself caring for a man she must deceive.

The contemporary story didn’t come so easily. I was brainstorming with my friend and fellow author, Melissa Jagears, when we remembered a recent news story about a man who had committed a terrible crime and an interview with a relative who raised him, who was just as shocked as the rest of the country over what her kin had done. Before long (and with additional help from my extraordinary editor, agent, and critique partner) we had the story of a mother, a radio host of a popular Christian morning show—whose son had committed an unspeakable crime. This woman would go through grief, but she would also struggle moving on with her life, struggle with the impulse to hide behind her radio personality, and struggle with finding her identity not in her son’s deeds, but in Christ. Through her attempt to find healing, she turns to the journal her son gave her on the eve of his crime, a journal that tells the story of another woman, centuries earlier, who also felt the need to hide behind a false persona.

Then…the writing. Yikes, this book was a tough one to bring to life. Putting myself in my characters’ shoes took all of the emotional, physical, and spiritual fortitude I could muster (and that God granted me), and yet for how difficult it was, it seemed to flow from my typing fingers with ease. I wrote it in less than three months! Now, it’s in the hands of my fabulous readers. J What a journey!

Q:  Let's start with a few serious questions. What message do you hope readers take away from your story?
A:   I am hopeful readers will come away with a freshened sense of empathy for those in difficult trials. Before I wrote this book, I didn't realize how often I judged someone by their circumstances. I would see a young person on the news who'd committed a horrible crime and immediately judge their family or their parents. This novel helped me to see beyond what I think I know. It definitely grew my humanity, my faith, and my empathy. I hope it does for my readers, as well.

Q:   I think it will cause many people to look at things a bit differently. Can you tell us about the historical research that went into writing this novel? Did you learn anything new that surprised you?
A:  Research is always one of my favorite parts of writing a novel. After I read everything I could on the Culper Spy Ring, we visited the village of Setauket on Long Island. This was the hometown of real historical people who were part of the ring—Abraham Woodhull, Major Benjamin Tallmadge, Caleb Brewster, and Anna Smith Strong. These were ordinary people who dealt with suppression and, through the prompting of George Washington, used the trust they already held for one another to conduct a covert group that would smuggle information out of British-occupied Manhattan. As Mercy came alive in my mind, it was wonderful to visit the very places she would have grown up, the places she walked and lived and worshipped and worked. Love that stuff! I think the most fascinating fact I learned was how adamant the members of the spy ring were about keeping their secret—most of them until death. With the exception of the brazen Caleb Brewster, the members of the Culper Spy Ring were extremely hesitant to talk of the role they played in their country’s freedom, even years after it happened. In fact, it wasn’t until the twentieth century that Robert Townsend’s role in the ring came to light. That’s how scared they were. That’s how ashamed many of them felt living beneath false motives. And yet they persevered for what they considered to be the greater good.

Q:   This novel explores some devastating events and topics—a school shooting, the loss of loved ones, and division within and among families. Why did you choose to tackle these difficult issues? A:   After I brainstormed with a couple of my author friends and my agent and editor, I saw the story before me, but absolutely balked at the idea of writing it. This was difficult stuff. Didn’t my readers see enough of the difficult when they turned on the news? Wasn’t it my job to give them an escape from the harsh realities of life? Honestly, I didn’t wrestle with this for long. Since I first began pursuing publication, I knew my stories would not be the sweet, easy ones. There is darkness in this world, and as a writer who longs to bring truth into it, I can’t in good conscience ignore the darkness. I can, however, bring hope into it. The funny thing about hope and good news is that it shines more brightly in the darkness. So when I write about a bombing or a historical war, when I write about the unspeakable actions of a family member or a heart torn apart by addiction and suffering, in part, it is what I relate to. It’s where despair tends to trip me up in this messy, broken world. BUT there is hope. And that is where I choose to cling, and it is this message that burns in my heart to bring forth to my readers.

Q:  What are some future projects you’re working on?
A:   Right now, I’m finishing up some research for my third book with Tyndale, scheduled to release in 2020. We’ll be back in revolutionary and contemporary Boston for that, so I’m excited! I’m also busy preparing some speaking engagements, as well as revising another timeslip story set to release next year. A lot to work on, but I’m loving every minute of it!

Q:   What's your favorite writing-related book?
A:   That's probably a toss-up between Stein on Writing by Sol Stein and Plot and Structure by James Scott Bell. Both of these books help things "click" in the early stages of my writing. I often still refer to them.

Q: . What advice do you have for new authors?
A:   Remember to make time to live, not just time to write about living :) My debut novel released less than a year ago, and I was completely caught up in it. I feel like I missed the entire summer with my pre-teen boys as I immersed myself in his new career. Looking back, this saddens me. Yes, there are certainly seasons to work hard, but after I became a published author, I realized that if I didn't want constant seasons of craziness in my life, I would have to get organized and guard family time. Publishing a book was my dream, and I'm so incredibly grateful for. But no matter how it sometimes feels, it is not the most important thing. Children grow fast. Family dynamics change. I really want to savor that journey, as well.

Q:  That's great advice. Thanks for sharing. Now, a few fun questions. What famous person would you like to me and why?
A:   Hmmm ... I Thank Princes Kate. Because ... well, she's a princess! We're also the same age. I'd like to pick her brain over royal expectations versus the need for independence.

Q:  Wonderful choice! I'd love to meet her, and other family members, too! What's one thing about you that would surprise your readers?
A:   I'm a little OCD about my cleaning. Okay, that's not a full truth — I'm A LOT OCD about my cleaning! I don't think most writers are this way, and I really do wish I could loosen up a bit. But unless our family is away or there's a dire emergency, I clean every Thursday morning, even when I'm on deadline. I can't think about a somewhat organized house. Strange, I know :)

Q:   Ha! I love that! One last question. Do you have any writing rituals (such as a particular pen, outfit, or music) you must have or do when writing?
A:   Besides the clean house?  Comfy sweatpants are a must, and when it's cold out, I have a special afghan I wrap myself in. Oh, and lots and lots of natural light, otherwise all fall asleep!

Q:   That definitely sounds cozy!
A:   Thank you so much for having me here, Leslie!

You're very welcome. I'm sure my readers enjoyed getting to know a bit more about your and your wonderful book.

I reviewed this book for RT Bookreviews Magazine. You can read my review here.
(I rated it 4.5/5 stars - TOP PICK!) 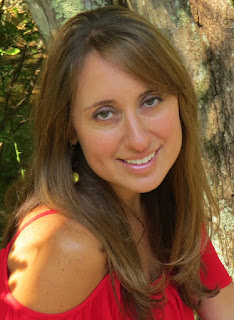 Heidi Chiavaroli began writing eleven years ago, just after Jesus had grabbed hold of her heart. She used her two small boys' nap times to pursue what she thought at the time was a foolish dream. Despite a long road to publication, she hasn't stopped writing since! Heidi won the 2014 ACFW Genesis contest in the historical category. Both her debut novel, Freedom's Ring, and her sophomore novel, The Hidden Side, are 4 1/2-star Romantic Times Top Picks! Freedom's Ring was also a Booklist Top Ten Romance Debut. Heidi loves exploring places that whisper of historical secrets, especially with her family. She loves running, hiking, baking, and dates with her high-school sweetheart and husband of fourteen years. She makes her home in Massachusetts with her husband, two sons, and Howie, her standard poodle.


Where you can find her online...