"To Claim Her Heart" by Jodie Wolfe ... and a GIVEAWAY! 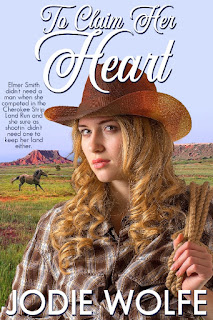 Jodie has offered to give away a copy of the book (hard copy - US ONLY; ebook - International) . You can enter by using the Rafflecopter link at the end of the post. (Giveaway ends August 24, 2018. If you are the randomly chosen winner, I'll contact you and pass along your information.)

In 1893, on the eve of the great race for land, Benjamin David prays for God to guide him to the "Promised Land." Finding property and preaching to the lost are his only ways of honoring his deceased fiancee. He hasn't counted on Elmer (Elsie) Smith claiming the same plot and refusing to leave. Not only is she a burr in his side, but she is full of the homesteading know-how he is sadly lacking.

Obtaining a claim in the Cherokee Strip Land Run is Elsie Smith's only hope for survival, and not just any plot, she has a specific one in mind. The land's not only a way to honor her pa and his life, but also to provide a livelihood for herself. She's willing to put in whatever it takes to get that piece of property, and Elsie's determined to keep it.

Her bitterness is what protects her, and she has no intentions of allowing that preacher to lay claim to her land … or her heart.


The story behind the story...

September 16th will mark the 125th anniversary of the Cherokee Strip Land Run of 1893. It was our Nation's last great race for land. 115,000 people showed up to raise for 42,000 thoughts. I can clearly picture that day. It was hot and dry. Folks gathered on nine different starting places located along the Kansas border and south of the Cherokee Strip in Oklahoma Territory.

All manner of conveyances could be seen — people on foot, horseback, buggies, wagons, bicycles, trains, etc. I could easily imagine the clamor and chaos as all those assembled awaited the gunshot that would signify the start of the race at noon. People were desperate. The country had undergone an economic catastrophe with the plummet of the New York Stock Exchange due to the over-investing in the railroads. Many businesses that depended upon the railroad were forced to close their doors. Quite a number of banks either closed or called in their loans. It was a difficult time.

Such is the backdrop for my new novel, To Claim Her Heart. This book is especially significant to me since it was my dear mother-in-law who introduced me to the history of the land run. It mattered to her because she had several relatives who competed in the land race and found claims. I vividly remember the summer of 1997 when she stopped off in Oklahoma to see one of those original properties. My sons and I tromped over the land and saw the homestead that was built in 1894. The first home had been a soddy that didn't last longer than a year.

The rock home I saw was partially built into the side of a hill and in a state of disrepair. A stream gurgled nearby, and within a couple of miles, the Gloss (Glass) Mountains cropped out of the landscape. It didn't take much for me to start imagining characters tromping through the area and choosing to settle there.

While Mom never lived to see this book finally published, she knew that I was working on it her last days. I'm so thankful that she shared her rich family history with me. Quite a few of the family stories she told me were included in my book.

Elsie Smith sets off in a race for land. She wants to carry out her pa’s wishes and stake out the plot he had planned to claim. However, she never intended to share the land … especially not with a preacher. Now, it will be up for the courts to decide whether the land rightfully belongs to Elsie or to Benjamin David, and that could take some time. They must find a way to coexist until the rightful owner is determined. Elsie has no desire for a relationship with Benjamin, or anyone else, but God may have a different plan.

Wolfe’s latest is based on the Cherokee Strip Land Run of 1893. It’s a sweet romantic historical tale with a steady pace and well-developed characters and dialogue. The characters are crafted in a way that they hold the readers’ attention. Benjamin is persistent, but not pushy, and Elsie is independent and determined, making them easy to connect with and root for. The snippets from Mrs. Wigglesworth’s Etiquette Guide to Proper Etiquette and Manners of Refined Society at the beginning of each chapter add to the enjoyment. Wolfe has a flair with words that accurately portray the challenges faced for the period, and her characters demonstrate the importance of trusting God, especially during trials and hardships. If you’re a fan of historical novels, this is one to add to your TBR pile. 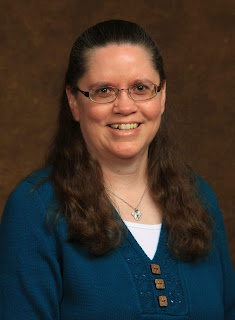 Jodie Wolfe creates novels where hope and working meets. She is a member of American Christian Fiction Writers (ACFW) and Romance Writers of America (RWA) and she has been a semi-finalist and finalist in various writing contest. A former columnist for Home School Enrichment magazine, her articles can be found online at Crosswalk, Christian Devotions, and Heirloom Audio. She's a contributor for Putting on the New and Stitches Thru Time blogs. When not writing, she enjoys spending time with her husband in Pennsylvania, reading, walking, and being a grammie. Learn more at www.jodiewolfe.com

Where you can find Jodie online...

a Rafflecopter giveaway
Posted by Leslie at 4:31 AM