"Still Waters" by Lindsey P. Brackett ... and a GIVEAWAY! 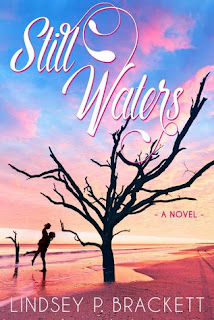 Lindsey P. Brackett has graciously offered to give away an electronic copy of this new release. You can enter by using the Rafflecopter link at the end of the post. (Giveaway ends December 30, 2017. If you are the randomly chosen winner, I'll contact you and pass on your information.)


There is irony—or rather perfect timing—in writing a post today to answer Leslie’s question, “How did this story come to be written?” The answer is all tied up in the loss of my maternal grandmother 27 years ago this week.
Not until I became an adult and mother myself did I appreciate the strength of my own mother during the Christmas of 1990. The loss of my grandmother—Grandmommy White Hair we called her—happened suddenly and unexpectedly only three days before Christmas. Now, I am the age my mama would have been then, and I marvel that my memories of that Christmas, while including the sadness of a funeral and the purchase of my first black dress, aren’t colored with heavy grief. They carried on—her and her sister and brother—perhaps for us, the children. Perhaps for themselves. Perhaps, because in her stubborn stoic way, my grandmother would have not wanted plans interrupted for her sake.
When I wrote Still Waters I allowed myself to imagine and build upon a life I had known briefly. I relied heavily on the dim memories I have of Edisto summers and family dinners and Christmas gift exchanges to round out my picture of who the grandmother figure in my story—Nan is her name—would become.  I hoped to create a woman of strength and dignity but with a bold stubborn streak that might cost her dearly.
A woman who, when I read over these pages, lets me breath life into my Grandmommy White Hair once again.
People ask me all the time how long it took to write this book. I suppose the truest answer is 27 years. From the moment she left this earth, I’ve wondered how I could recapture her spirit. My earliest pen to paper moments from this story are jottings from my college days, but I didn’t actually start forming a book until 2007. A few chapters here and there—and a long time locked away in a computer file before I dusted it off after the loss of another grandparent.
This time my paternal grandfather passed away from cancer one week after Christmas. It was January 2014 and I found myself realizing keenly that our time is precious. So I did the one thing that gets a book written—I put myself in a chair for a little bit each day, typing in the midst of motherhood until I was done.


I’m grateful to Leslie for hosting this little bit of my story today. I’m beyond humbled by those of you who have told me what Still Waters—and its themes of home and forgiveness—have meant to you. Thank you for reading and loving Nan, despite her habit of keeping secrets.

Cora Anne Halloway has big plans which include graduate school. They do not, however, include returning to Still Waters, which is the last place she wants to go. Yet when her grandmother insists that she spend the summer there, Cora reluctantly agrees. For most people, the location is picturesque. For Cora, there are haunting memories, such as her grandfather’s death, the decline of her parents’ marriage, and a tragic drowning, for which she feels responsible. Cora is even less impressed to find Tennessee Watson helping her grandmother with repairs on the cottage. He wants to restore his friendship with Cora, and he would be interested in being more, if she would let him. Will Cora be able to make peace with her past?

It is hard to believe this is Brackett’s debut novel. It is a story full of faith, family, and forgiveness. The characters are engaging and relatable. I particularly enjoyed Nan, who, at times, reminded me of my own grandmother. The setting is beautiful, and there are numerous heartwarming scenes. While some plot points are a bit predictable, it does not take away from the enjoyment of the story overall.

Disclaimer: I received a complimentary copy, but I was not required to leave a positive review.

Buy Links—there’s a coupon to clip on Amazon for $2 off
Paperback:
https://www.amazon.com/Still-Waters-Lindsey-Brackett/dp/1946016233/ref

Award-winning writer, Lindsey P. Brackett just writes life--blogs, columns, articles, and stories--in the midst of motherhood. A blogger since 2010, she has published articles and short stories in a variety of print and online publications. She writes a popular bimonthly column for several local newspapers in which she meditates on small-town southern life.

Her love of family ties and southern places prompted her first novel, Still Waters, a Lowcountry story about the power of family and forgiveness. Thanks to her four kids, in her home you'll find wet towels, lost library books, and strong coffee.

a Rafflecopter giveaway
Posted by Leslie at 4:38 AM