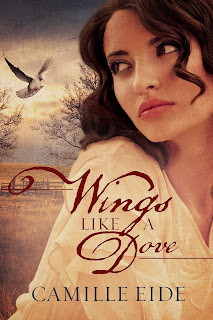 Camille has agreed to give away an electronic copy of this book to one lucky blog reader. You can enter by using the Rafflecopter link at the end of the post. (Giveaway ends January 14, 2020. If you are the randomly chosen winner, I'll contact you.)

The idea for Anna’s story came on the heels of my previous novel, The Memoir of Johnny Devine. I wanted to try my hand again at setting a story during an era with a prominent social issue that could trickle down into the individual lives of the characters. Wings Like a Dove was birthed by a much different process than my other novels. The idea for Johnny Devine came from a dream—one simple, heart-wrenching scene—and an entire novel sprang from that. Wings came from a “What If” brainstorm. What if an unmarried immigrant found herself pregnant, in a time in America that would make her predicament more of a challenge?

After the central story took shape, the characters took on lives and stories of their own, as often happens in fiction writing. Most of the supporting characters inherited traits from real life, personal experience, and from people I’ve known. Thomas speaks reverently of the man who raised him. This man, Gabriel Johansen, is fashioned after my late father in law. And in small part, so were most of the orphan boys, who are the same age my father in law would have been in 1933. Some of details in this story come from stories of his boyhood.

I didn’t intend for the story to be a difficult read; I wanted to tell a heart-warming story of redemption. And I hope I have.  But as I researched the era, the discovery of the Women’s Ku Klux Klan and their agenda to “cleanse” their communities of certain people, including Jews, meant that I had no choice but to include it. The presence of the Klan in middle America fit all too well with the string of challenges that Anna would face in 1933. And as a side note, when I was plotting this story several years ago, before delays kept interfering with its completion, I had no idea what the future held, what conversations about immigration, racism, and unity would be taking place now, as the story is released. I can only wonder if God had a plan for this story, for such a time as this.

He stopped and faced her, his eyes alight with something cautious, yet hopeful. “Maybe we can help each other.”
Anna studied him, the sincerity of his expression, the patient way he waited, the strong, pleasing angles of his face. “How?”
“You can help me work on being more connected, and…I can help you search for what you’ve lost.” He was no longer jovial, but suddenly very attentive, the hope in his eyes entreating, tender. Tempting. It was not difficult to see herself spending time with Thomas. It was quite easy. So easy, in fact, that she suddenly saw the two of them, in her mind’s eye, making a home, working together and sharing a life, loving these boys, loving…
A small gasp escaped her.
“Anna?” His voice was breathless with wonder. He dipped his head closer and peered into her eyes, studying her carefully.
As clearly as if in a waking dream, she saw herself married to Thomas, saw herself loving him with all of her heart and soul. Which, of course, was impossible. Painfully so.
Quickly, she dropped her gaze, blocking his scrutiny. Surely her eyes would give away both her foolish feelings and her dirtiness.
He reached up with his fingertips and gently tilted her chin upward, forcing her to look him in the eye. “Forgive me, but … I need to see if that was just my imagination.”
She swallowed hard. Look away, Anna ...

Eide’s latest rivets the reader and has a little bit of something for just about everyone: romance, history (Great Depression), and real-world challenges (such as discrimination). (Sadly, some issues addressed in this book are still alive in today’s society, as well.) It’s a beautifully written powerful tale that will likely stick with the reader long after the final page. Grace, love, healing, and forgiveness are key takeaways. It was one of my favorite books from 2019. Wings Like A Dove is historical fiction at its finest.

Anna finds herself on her own and pregnant in a world that is intolerant of Jews. Yet through it all, she is courageous and perseveres, overcoming obstacles no one should have to face. Along the way, she encounters a group of orphans, and together they’ll each learn from each other things they’d never considered before. They will all discover that God is always in control.

Aside from Anna, Thomas and Samuel steal the show … and the readers’ hearts. This is the first book I’ve read by Eide, but it won’t be my last!

Some of my favorite quotes:

“What if we choose instead to be blind to people’s flaws and shortcomings and the differences we do not understand?”

“Will we not all need mercy at some time in our lives? Mercy we do not deserve? It is a precious gift, and yet it is free. Everyone has the power to give it.” 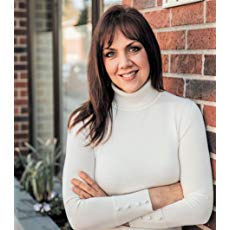 Camille Eide is the award-winning author of inspirational romantic fiction including The Memoir of Johnny Devine. Camille lives near the Oregon Cascades with her husband and is Mom to three, Grammy to five, and enjoys the natural beauty of the Pacific Northwest. She also loves the liberating truth and wisdom of God’s word, and hopes that her stories will stir your heart, strengthen your faith, and encourage you on your journey.

Other titles include: Savanna’s Gift (Christmas), Like There’s No Tomorrow, Like a Love Song, The Memoir of Johnny Devine, and The Healer (exclusive to newsletter subscribers).

a Rafflecopter giveaway
Posted by Leslie at 3:05 AM