"Misleading Miss Verity" by Carolyn Miller ... and a GIVEAWAY! 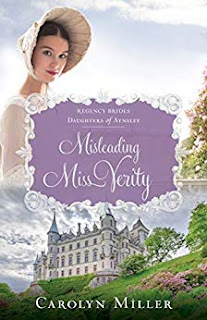 Carolyn's publicist has agreed to give away a complete set of the "Daughters of Aynsley" trilogy (all three books!) to one lucky blog reader (US ONLY). You can enter by using the Rafflecopter link at the end of the post. (Giveaway ends December 13, 2019. If you are the randomly chosen winner, I'll contact you.)

This is the final installment in the “Daughters of Aynsley” series, but it could be read as a standalone (which is what I did).

The cover catches the reader’s eye, and the characters quickly pull them in to this charming tale. It’s the first book I’ve read my Miller, and I found it to be engaging and filled with vibrant descriptions. The book has a little bit of something for just about everyone, including castles, horse races, pirates, and foreign settings. Verity’s vulnerability made her easy to relate to adore. In general, characters (including the secondary ones) and scenes were well-developed, and things moved along at a realistic pace. There is a spiritual element woven throughout the story, so it’s not overwhelming. Faith, hope, and love are key themes. Fans of Regency novels (and those wanting to check out the genre) should pick this one up!

It was the sobbing that decided her.
The Honorable Verity Hatherleigh eased from her bed and stole across the room to the disconsolate girl whose snuffling and muffled weeping made sleep impossible. She touched her roommate on the arm. “Lucy, dear. What is wrong?”
The shrouded figure shifted, lowering the heavy blankets whose inability to stifle the sounds of sadness had perturbed Verity’s slumber. Clouded moonlight streamed pale from the window, framing a plain, round face made less lovely by red eyes and blotched cheeks. “It’s Papa. He . . . he’s—” Lady Lucinda Wainbridge gulped, her chin quivering, a sure sign more waterworks were in the offing.
“Now, Lucy, stop, take a deep breath”—Verity waited as the older girl complied—“and tell me what has happened.”
After another shaky breath, Lucinda exhaled noisily, then blew her nose with a honk reminiscent of a startled goose.
“If you don’t want Miss Pelling to check in here, you might want to do that more quietly.”
Lucy’s eyes flashed accusingly. “You weren’t here when I was telling the others.”
“No, because I was in Helena’s room, helping her with her French for tomorrow’s examination, as you well know.” Verity dashed back 10 Misleading Miss Verity to her bed and pulled on her padded dressing gown. These rooms, for all the exorbitant fees paid, were never heated properly. She returned, wrapping a woolen blanket around her shoulders. “Now, what happened to your father?” Had the Earl of Retford sickened? Her heart quickened. Had he died? Poor Lucinda . . .
Lucinda shook her head. “Nothing has happened to Papa. It’s what he will do.”
“Which is?”
“Remove me from Haverstock’s!”
This was a bad thing? “Why are you so certain he will?”
Lucinda wiped her eyes. “He’s bound to as soon as Haverstock sends him the letter she found from William.”
“She found it? I thought you had it well secured. Didn’t you place it under the floorboard as I suggested?”
“I was going to . . .”
Lucinda’s shoulders slumped, and she looked so miserable, Verity didn’t have the heart to scold her roommate’s folly. Dear foolish Lucy, with her silly infatuation for a squire’s son of whom her fastidious parents would never approve. Many had been the confidences Lucinda had whispered, ever since Verity had been forced to leave the room she had previously shared with Helena. Many a dull evening spent listening to Lucy prattle on about William’s inestimable qualities, whilst Verity strained to hear the telltale creaks in the hall that told of vigilant staff, waiting until the creaks had quite faded away before stealing across to the room which had fostered a friendship more dear than that of her family’s.
Helena Chisholm was the most loyal and encouraging person Verity had ever met, filled with a zest for life and mischief that rivaled Verity’s own. When Miss Haverstock had been informed about one of Verity’s previous secret visits to the headmistress’s study by the not-so-honorable Prudence Gaspard, Verity’s separation from Helena had been swift, painful, and irrevocable. Her punishment was to be bored by Lucinda’s ill-advised romance for the remaining weeks until their schooling was considered complete.
Not that Verity was against romantic attachments as such; more Carolyn Miller 11 that with such opposites involved, this particular attachment seemed a complete and utter waste of emotions, when anyone could see it was an attachment doomed to futility and failure. Her lips twitched. Although, judging from Lucinda’s descriptions of her beau, he seemed as dull as she, so perhaps they were well-matched.
“This is not funny, Verity. What am I going to do? When Papa sees what we have been writing to one another, he’ll have a fit, and threaten to marry me off to old Lord Winchester. I’d rather die than marry him!” Lucinda sniffed, as another tear tracked down her face.
“What did William write that is so concerning?” Normally Lucinda shared every phrase over and over until Verity could mouth along too, but lately she had been too busy helping some of the younger girls prepare for their upcoming examinations. “Surely it cannot be so bad.”
The moonlight revealed a faint blush on Lucinda’s cheeks. “It was most poetic. William was describing me, you see. He said I am beautiful.” She smiled a wobbly smile.
“And if he loves you, then I suppose he should.” Verity nodded her affirmation, while wondering at how men could be so blind. Lucinda, beautiful? Even at her best she could only be described as somewhat attractive. Verity knew herself to hold no pretensions to beauty—her hair was too black, her eyes too pale, her eyebrows too slanted, her chin too pointed, the whole effect considered to be odd-looking rather than attractive, or so her mother said. But it had always surprised her how men could see what they wanted to see, such as the men who loved her elder sisters and openly admired their golden beauty, most recently at last month’s Boxing Day Ball during which Cecy’s betrothal had been announced. In Verity’s mind, Helena was more attractive, her smile even brighter than the red curls that adorned her head. “Titian-haired” their drawing master had once remarked.
Lucinda sighed, reclaiming Verity’s attention. “I suppose he did get a little carried away.” She smiled coyly, clearly inviting Verity to enquire further.
Verity stifled the yawn. “It’s very late—”
“He said my lips are like a scarlet ribbon!” 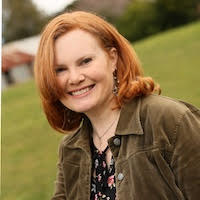 Caroloyn Miller lives in New South Wales, Australia, with her husband and four children. A longtime lover of Regency romance, Miller has won a number of Romance Writers of America and American Christian Fiction Writers awards. Her debut series, Regency Brides, is now available in German and Dutch translations and on audiobook. She's a memeber of American Christian Fiction Writers and Australasian Christian Writers. See more at carolynmillerauthor.com.

a Rafflecopter giveaway
Posted by Leslie at 1:32 AM