Takeover Thursday with Pam Hillman ... and a GIVEAWAY! 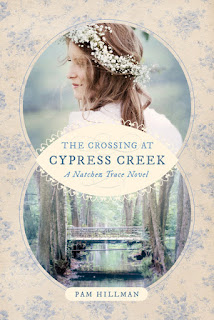 Pam has offered to give away a copy of the book. (Winner's choice of any book in The Natchez Trace Novel series. Print - US ONLY; ebook - international or US) You can enter by using the Rafflecopter link at the end of the post. (Giveaway ends June 6, 2019. If you are the randomly chosen winner, I'll contact you.)

I’m excited to that the third and final book in my Natchez Trace Novel series, The Crossing at Cypress Creek makes its debut June 4, 2019. The thing is, I learned so much about the 1790s during the Natchez Mississippi Territory that I don’t hardly know where to begin.

The Promise of Breeze Hill kicked off the series with my characters on a derelict plantation that needed major repairs after a devastating fire. Indentured servant and hero Connor O’Shea was a master craftsman who loved working with wood and his job was to repair the family home. The plantation owner and his son had dipped their toes into cutting timber to haul along the dangerous Natchez Trace to Natchez for the booming construction, but their sawmill fell into disuse when the son was killed. Our hero Connor resurrected that endeavor, saved the plantation from ruin, and got the girl in the end, which is the ultimate goal, yes?

Hero #2 came along in The Road to Magnolia Glen. Quinn O’Shea was Connor’s brother and he had a background in mining back in Ireland, but he’d also apprenticed as a blacksmith for the mine. Even though Quinn longed to shake the dust of Natchez and familial responsibility off his feet, his loyalty to family and his training was perfect for helping with his brother’s burgeoning logging operation. In the end, he found the hearth and home and adventure he’d been longing for, without having to travel the world. And, yes, he got his girl as well.

And that brings us to The Crossing at Cypress Creek where the two eldest O’Shea brothers have partnered with their friends, the Wainwrights, to clear a path and cut timber in the wilderness between the Natchez Trace and the Mississippi River. It’s an exciting and dangerous venture, with men snaking logs out of the forest, highwaymen plying the primitive roads, and crews battling river pirates, to navigating unwieldy timber rafts down the Mississippi.

Caleb O’Shea, brother number three and our intrepid hero, arrives in the Natchez Territory after criss-crossing the globe as a sailor and a mercenary in the far-off African continent. This prodigal is the perfect brother to have in the fight to come as well as the new challenges of navigating the river with timber rafts. Timber rafting is fascinating, and I can’t wait to share all I learned with you.
My heroine, Alanah Adams, is an herbalist living in the dark forest close to a rough river community called Cypress Creek. Anyway, it’s just all great fun, although I was sad to get to the end of the series. We’ll talk about some of the medicinal plants and herbs that grow in Mississippi and their uses.

Remember, this whole series is set in the 1790s in a largely unpopulated part of the country. There were no railroads, few passable wagon roads and homesteads and plantations were few and far between. Generally, it took half a day to a full day to get from one place to the other.

While my characters at Breeze Hill, Magnolia Glen, and Cypress Creek are fictional, the rest is pulled directly from the rich and varied Mississippi history that I claim as my own.

Have you read my Natchez Trace Novel series? What fascinates you the most about this time period in south Mississippi?

The Crossing at Cypress Creek grew up organically from the series overview. Set in the Natchez District in the 1790s, the series deals with indentured servants, the raw frontier of the South, immigration to the new world, and survival. Caleb is the embodiment of the prodigal son, and herbalist Alanah is loyal and dedicated to her world in the wilderness along the Mississippi River. Much like the herbs, roots, and flowers Alanah harvests to keep her family alive, their story grew organically from the ground up.

Sailing and soldiering around the world has taken Caleb O'Shea far from his native Ireland, so he never imagined that a promise to see a fellow crewman safely home would practically land him on his brother's doorstep. After spending years away from his family, Caleb isn't certain what kind of reception he will receive when he steps foot in Natchez, Mississippi. The one thing he knows for sure is that he won't stay long.

Since her sister was kidnapped by river pirates six months ago, Alanah Adams has taken special care to avoid drawing attention to herself. Those living in the rough-and-tumble settlement of Cypress Creek might even think she's addled. But when she stumbles into Caleb and his friends in Natchez, she appears to be the picture-perfect lady.

Caleb only catches glimpses of the mysterious and beautiful Alanah before she disappears. But a chance encounter with her at his brother's logging camp near Cypress Creek leaves him uncomfortable at the thought of the young woman traversing the dangerous area alone. At a crossroads in his life, Caleb must decide whether he wants to give up the worldly adventures he's been seeing for one closer to home. 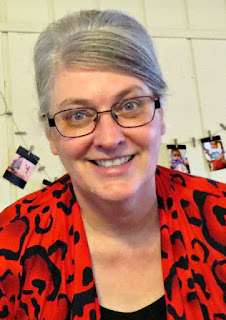 CBA Bestselling author Pam Hillman was born and raised on a dairy farm in Mississippi and spent her teenage years perched on the seat of a tractor raking hay. I those days, her daddy couldn't afford two cab tractors with air conditioning and a radio, so Pam drove an Allis Chalmers 110. Even when her daddy asked her if she wanted to bale hay, she told him she didn't mind raking. Raking hay doesn't take much thought so Pam spent her time working on her tan and making up stories in her head. Now, that's the kind of life every girl should dream of.

a Rafflecopter giveaway
Posted by Leslie at 3:49 AM