Takeover Thursday with Tabitha Bouldin ... and a GIVEAWAY! 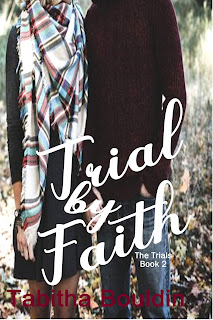 Tabitha is here to share a bit about her latest release. She has offered to give away an electronic copy of the book. You can enter by using the Rafflecopter link at the end of the post. (Giveaway ends May 23, 2019. If you are the randomly chosen winner, I'll contact you.)

How the story came to be...

When I wrote book one, Trial by Courage,  I had no idea it would become a series. I wrote THE END and moved on. Halfway through my second manuscript, I had a hero with no name and no backstory. I’m a pantser, which means I sit down and write without an outline. Out of the blue, it hit me, this was meant to be a return to Trial by Courage, picking up two years after Trial by Courage ended. Only, instead of following Cheyenne and Willie, Trial by Faith focuses on Cheyenne’s brother, Kane. Trial by Faith is a story about family. The goal was to showcase a family’s love and their willingness to sacrifice for one another.

The interior of the SUV was charged with electricity as Faith felt his disapproval. There was no excuse for her actions.
She knew it.
What she’d attempted to do was crazy. Faith understood that now, but in the fury of the moment, she had felt the desire to attempt the impossible. Refusing to allow herself to be defensive, Faith turned to face him. Finally able to get a decent look at him, she realized she liked what she saw. There was a shiver of shock at the feeling.
The military cut and clean-shaven face suited his strong jawline and crooked nose. She’d bet a month’s salary that nose had been broken more than once.
Lines of tension left his eyes looking tight. He looked angry. Faith had the feeling that not many things had made this man smile. She was unable to see the color of his eyes in the dim light.
His large hands wrapped around the steering wheel with a force that immediately reminded Faith of what it felt like to have one of those strong arms wrapped around her. Even through the rush of adrenaline, Faith had recognized the strength he possessed.
Faith took a deep breath and apologized, “I’m sorry.”
The lines cleared between his eyes, a brief flash of surprise taking the place of the anger.
“What were you trying to do?” he asked with a quick look over at her.
She looked longingly at the mountain and sighed. “I need to get home,” she said in lieu of an answer.
He shook his head. Exasperation colored the tone of his voice. “What could possibly be so important that you would try to climb a tree across a raging river?”
Faith turned back to face him, her shoulders shrugging automatically. “My kids. I need to be with them.” 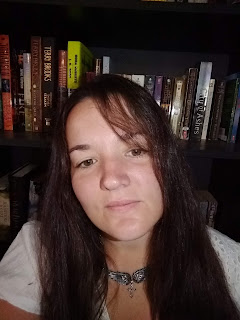 Tabitha was born, raised, and still lives in the same small town in middle Tennessee. A member of ACFW (American Christian Fiction Writers), she has been writing for nearly five years but only recently began publishing her work. She is in her last year of college before obtaining her Bachelor’s in Creative Writing. Her books are meant to encourage others through the trials of life. While the stories are fiction, they come from situations that many of us face.

a Rafflecopter giveaway
Posted by Leslie at 2:53 AM