"before I knew you" (Choices Matter, volume 1) by Beth Steury 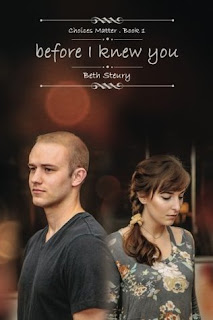 Seventeen-year-old Preston has quite a past, but he is ready to make some changes, especially after he meets Maggie, a new girl in town. She doesn't know about his past, and she's sure he's out of her league anyway. Preston's afraid of the truth coming out … which it always seems to have a way of doing. Maggie and Preston learned that all choices have consequences.

This is Steury's debut YA novel, and it's along the same lines as her blog: "Waiting matters... Because YOU Matter." It's the first in a trilogy entitled "Choices Matter." If you have a teen in your life, you may want to consider sharing this with them (though you should read it yourself first). The story is told in alternating, first person POV (Preston and Maggie). The scenarios are realistic and relatable, and Steury accurately captures the teenage voice (as well as the drama, angst, etc). The author tackles tough issues, such as intimacy in a teen relationship and the associated consequences. The characters demonstrate that choices do matter. The pace is quick, thanks to relatively short chapters. The story is well-written overall, and there is just a touch of mystery thrown in. It will be interesting to see what happens next, as the ending does pave the way for the sequel.

Disclaimer: I received a complimentary copy, but I wasn't required to leave a review.