Takeover Thursday with Carolyn Walker ... and a GIVEAWAY! 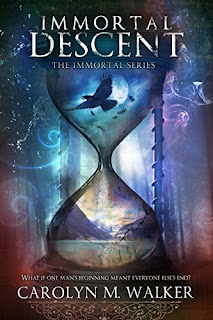 Carolyn is here to discuss her latest release. She's offered to give away an electronic copy of her book. You can enter by using the Rafflecopter link at the end of the post. (Giveaway ends May 24, 2018. If you are the randomly chosen winner, I'll contact you.) Here's Carolyn...

About the book...
Immortal Descent is a supernatural thriller about one man’s journey into a dark world of ancient creatures, secret societies, and the origin of immortality. Ethan West hopes for a fresh start in college, after a lifetime of pain and loss. But instead he gets a curse—a rebirth that closely resembles a death sentence. Wielding a rare and powerful, yet unpredictable, ability, Ethan becomes a savior and a danger to his world all at once. Buried throughout history, a hidden lineage of immortal ancients are at war. And Ethan’s ability can put an end to it. The only problem is that power this great always comes with an unspeakable price…

What if one man’s beginning meant everyone else’s end?

Ethan didn’t realize he was screaming until he felt Rue shaking him. His eyes flew open and he stared up at her face and into those bright silver eyes. For the briefest instant, all his fear melted away when he looked up at her. He remembered the shadowed eyes of the woman from the alleyway. These eyes were so different. Never had he seen eyes as hers before, so intense—so bright, so capturing. He held her gaze, almost afraid to look away. If he looked away, what would he see?

“So much detail and such complex characters! It’s a multi-layered storyline with plenty of twists and turns that really take you on a journey.” – Cindy Walker

Other fans have called Immortal Descent “amazing” and “completely original,” and say it’s a read that is “absolutely impossible to put down!”

Q: Why did you write Immortal Descent?
A:  Immortal Descent originally came to me as a short story idea about a glimpse into the life of an immortal, witnessed by an ordinary man. But after sitting on the idea for a while, I realized the story deserved so much more. I’d read plenty of stories about immortality, but few addressed the origin of it and why. That’s when I thought this would make a great story, so I began researching it. Add to that: dark factions, secret societies, an underground war, plus magic, and you’ve got the world of Immortal Descent.


Q:  Will this be a standalone novel or a series?
A:  This story took on a life of its own. It’s become an epic tale involving ancient lore, taboo history, and the idea of immortality existing in the real world. I’d written a paranormal thriller novel revolving around a (seemingly ordinary but not) young man named Ethan West and his experiences with the supernatural, but there is SO much more. Because of the scope of Immortal Descent’s universe and the extensive history it pulls from, readers can expect a series of books. We’ll be seeing more of Ethan, learn more about the original immortals known as the Lorns, as well as dig deeper into the stories of the antagonists of this book.

Q:  This book is at the threshold of New Adult with the protagonist Ethan West being just 20 years old. Was this intentional?
A:  When the idea came to me as a short story, I was in my early twenties. I was still growing up and the feelings I had during that time in my life were very strong. I always knew I wanted to write a story with a protagonist at that particular age—there isn’t quite a time like it. Just as the teen years are a remarkable time, so is that short span of years thereafter. Ethan suffers from anxiety, struggles with his identity, and has other concerns common for someone his age. He’s turbulent, impetuous, and lost at times, but evolving—all elements that are pivotal to this dark story. 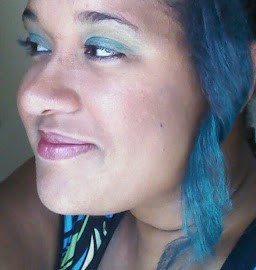 Carolyn M. Walker grew up surrounded by books and has a particular soft spot for fantasy stories and psychological thrillers. With a Bachelors degree in both English Literature and Psychology from Florida State University, Carolyn loves exploring the many sides of the human psyche and building worlds that address some of life’s greatest “what-if” questions. In addition to being a creative writer, Carolyn is also a certified copywriter, copy editor, and marketing consultant.

Book Trailer:
https://www.youtube.com/watch?v=koGpNlfFqto
a Rafflecopter giveaway
Posted by Leslie at 6:07 AM