Barbour Publishing has a new series of books coming out in 2019-2020, and I've read the first two books that have been released so far. Barbour has agreed to offer one print copy of each book to one lucky blog reader (US ONLY). You can enter by using the Rafflecopter link at the end of the post. (Giveaway ends June 14, 2019. If you are the randomly chosen winner, I'll contact you.) 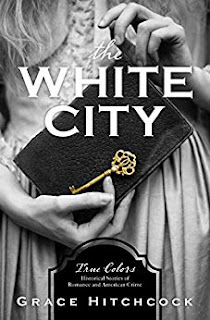 Barbour Publishing is pleased to announce the launch of a daring new fiction series not for the faint of heart. True Colors will explore true, riveting stories of American criminal activity layered in historical romantic suspense. This unique 6-book series will kick off in March 2019 with the release of The White City by up-and-coming author Grace Hitchcock. The main character in this fascinating read attempts to uncover the cause of the strange disappearances at the 1893 Chicago World’s Fair. This true-to-history story is based on the crimes of infamous serial killer H. H. Holmes. Releasing approximately every other month by a talented team of authors, True Colors will satisfy a variety of fiction readers interested in American history, true crime, and romance. Each title and cover will feature a prominent color to tie in perfectly with the series name and create a strong brand presence.

I enjoy True Crime stories, so I was interested in seeing how Christian fiction would tackle it in this new series, starting with The White City by Grace Hitchcock.

The story is based on H.H. Holmes, a read serial killer who terrorized Chicago during the time of the World’s Fair in 1893. Winnifred Wylde loves romance novels but finds herself playing amateur detective after witnessing what she believes to be a kidnapping. Jude Thorpe, a police detective, is assigned by her father to be her bodyguard as she works undercover as a secretary to investigate the potential suspect. Has she indeed found the killer? Will she end up being the next victim?

I don’t know a lot about this time in history, so I did learn a bit along the way. However, the pace was a bit slower than expected (or preferred). There wasn’t as much suspense as I’d anticipated, especially as it’s based on a real (serial killer) event. At times, the action was spot-on, but it didn’t maintain the pace throughout. When reading books such as this, I enjoy sleuthing out the clues along with the character, but I really wasn’t able to do that with this story. The romance angle was a bit predictable, but it was okay. While this wasn’t exactly my cup of tea, I’m interested in checking out other books in the series as they’re released.

Disclaimer: I received a complimentary copy, but I wasn’t required to write a positive review. 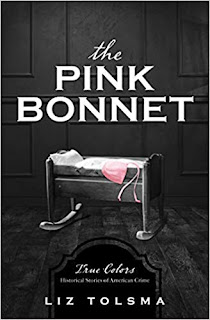 Book Two in the True Colors Series Will Thrill Readers
How far will a mother go to find out what happened to her child?

Readers who fell in love with book one of the chilling True Colors series will be thrilled to read book two, The Pink Bonnet by Liz Tolsma. Releasing June 2019, true crime lovers will travel to the Tennessee Children’s Home Society in 1932 where children seem to disappear. Widowed in Memphis during 1932, Cecile Dowd is struggling to provide for her three-year-old daughter. Unwittingly trusting a neighbor puts little Millie Mae into the clutches of Georgia Tann, corrupt Memphis Tennessee Children’s Home Society director and suspected cause of the disappearance of hundreds of children. With the help of a sympathetic lawyer, the search for Millie uncovers a deep level of corruption that threatens their very lives.

True, riveting stories of American criminal activity are explored through unique stories of historical, romantic suspense. Collect them all and be inspired by the hope that always finds its way even in the darkest of times.

I’ve read a few things lately about the “business practices” Georgia Tann engaged in, which are appalling, so I was interested in reading this book (particularly as I’m a fan of Tolsma’s other books).

Cecile wants to do her best to provide for her daughter Millie Mae. As a single mother, it’s challenging to find a job, and Cecile allows her neighbor, Mrs. Ward, to watch Millie on occasion so she can look for a job. Cecile never expected to have her daughter signed away to Georgia Tann, who runs the Tennessee Children’s Home. Cecile is determined to do all she can to get her daughter back. Sadly, Cecile learns that she’s not the only mother to have her child stolen by Miss Tann. Cecile will need help, and attorney Percy Vance seems to fit the bill. However, is it already too late to save Millie?

To begin with, the cover grabbed my attention. It made me even more interested in reading the story. Then, the story grabs the reader even more with Cecile’s love and determination for her daughter Millie Mae (which may remind the reader of God’s love for us). Tann’s practices of trying to re-home children so have a better life are just horrifying and hard to imagine happening in the US. It makes you wonder how many people turned a blind eye to what was going on. The book does have a Christian message throughout, but it doesn’t overpower the story. The characters are well-developed, and the secondary characters are crucial to the plot, as well. It's an emotional read and one that may stick with the reader after the final page.

a Rafflecopter giveaway
Posted by Leslie at 4:48 AM