"The Songbird and the Spy" by J'nell Ciesielski ... and a GIVEAWAY! 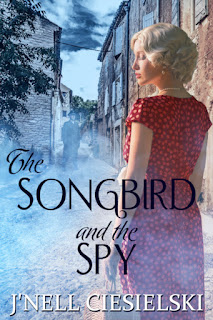 J'nell is here to share a bit about herself and her latest release. She's offered to give away an electronic copy of the book . You can enter by using the Rafflecopter link at the end of the post. (Giveaway ends February 22, 2019. If you are the randomly chosen winner, I'll contact you.)

Q: What message do you hope readers take away from your story?
A:  To be perfectly honest, I didn't start out with an intended message. I wanted to tell a fairly common story of falling for the wrong person with a twist of secret identities. Along the way, threads of not judging at first glance and finding unlikely bonds of love wove together in surprising ways. But it is in the small deeds of courage in the face of evil that are the soul to this story. Every-day people striving to do what's right, taking risks no matter the fallout or danger to themselves because there is a rightness that goes above personal gain. I hope it gives people courage, no matter how small or significant they believe their role in life to be.

Q:  What can you tell us about your next project?
A:  I have a novella coming out later this fall in a collection with three other authors. My story, "Night Fox," is set after the disastrous Jacobite Rebellion of 1715. My heroine turns thief in hopes of paying off her family debts until she runs afoul of the local laird's rigidity for rules. When she sets out to steal his priceless heirloom, the chase is on! Scotland is my favorite place in the whole wide world, so I love every opportunity I get to write about it. Plus, I love the idea of a charming lady thief.

Q:  That sounds like an interesting book. I look forward to checking it out later this year. What writers have inspired you?
A:  Roseanna White's incredible scope never ceases to amaze me. She writes series after series, most set in an era I adore, while running her own agency. How does she do it all? I believe she may be powered by unicorns and rainbows!

Recently, I came across Amor Towles. Oh my goodness. This man writes poetry in fiction form. He takes words to a level of brilliance that exceeds mere mortal expression. If I could have the amount of talent he has in his little finger, I'd be set for life.

Q:  I agree about Roseanna! I've never heard of Towles. I'll have to check out his books. Speaking of books, which book do you wish you'd written?
A:  Going off my current mood, it would be The Last Kingdom series. The story of Uhtred son of Uhtred has swallowed me whole with delicious appetite. It's a time not often talked about with King Alfred the Great, England before it was England, invading Danes, and the clash of paganism and Christianity. It's a sweeping saga of one man, half-Saxon and half-Dane yet belonging to neither, who is trying to reclaim his birthright. Destiny is all!

Q:  What's your favorite writing-related book?
A:  Believe it or not, it's little language dictionaries. Yes, plural because I have several depending on what era and region I'm writing in. These may not be writing-related, per se, but they're invaluable to me because without the right words the story is dead. Why tell someone to be quiet when you can say "Wheesht!" in Scots?!

Q:  Very true! I like learning different words like that, so your dictionaries sound interesting. What famous person would you like to meet and why?
A:  Ginger Rogers. She had it all: beauty, glamour, fashion, picture-perfect closeups, and she could dance circles around Fred Astaire. Literally. The woman did everything he did, but backwards and in heels! I'd beg her to teach me to dance because I have absolutely zero rhythm.

Q:  Good choice! What's one thing about you that would surprise your readers?
A:  I worked as a car valet while I was in college. I got to drive some very interesting cars, some very expensive, some that were like parking a barge, and a few I thought might fall apart as soon as the rusty door slammed shut.

Q:  That would be an interesting job! Do you have any writing rituals you must have or do when writing?
A:  My writing time starts at 1 p.m. and ends at 3:30 p.m. My, that's precise, you might say. Only because it's when my daughter spends mandatory quiet time in her room or she's at preschool. I get a nice, tall glass of water, load up a quiet soundtrack that coincides with the setting of my story (right now I'm into Outlander or The Hobbit), and settle into my girly pink office. At some point I'll pace around the room when I get stuck or wander down to the kitchen for a snack. All of this is done in comfy house pants and fluffy slippers.

Q: Who are three fictional people you'd like to meet?
A:  Count Rostov from A Gentleman in Moscow. They just don't make them like that anymore, and he'd have such stimulating conversation. Captain Gregg from The Ghost and Mrs. Muir (but only if it's Rex Harrison!). And finally Juliet Ashton from The Guernsey Literary and Potato Peel Pie Society.Golly, that's a mouthful. I loved her spunk and humor, plus, she's a writer. I'd love to learn all about her experiences during the war and then writing about those amazing people on the island.

Q:  Great choices! One final question. If you were stranded on a deserted island, what three things would you need to have with you?
A:  Lip balm. The good kind that doesn't make your lips even drier, like the rosy one I have from Vaseline. A razor because the thought of rubbing prickly legs together makes me gag. And ice cream, which I realize would need a freezer, but this is a fantasy question, right? So we'll all pretend it's the kind of ice cream that doesn't melt 🙂 Or have calories 🙂

Oh, that ice cream sounds perfect! Thanks so much for stopping by, J'nell. I'm sure my readers will enjoy learning a bit more about you. All the best with your latest release!

American music student Claire Baudin finds herself trapped in Nazi-occupied France. She needs to raise money in order to escape, so she works as a singing barmaid. There, she meets Nazi Captain Michael Reiner. Unbeknownst to Claire, he’s not all that he seems. Instead, he’s a British spy. He can tell Claire is harboring a secret, and he’s determined to find out what it is. Doing so could cost him his assignment, his heart, and his life, especially if his cover is blown. Is it possible for a songbird and a spy to have a future together?

Ciesielski’s sophomore debut shows she has a promising future. The Songbird and the Spy provides an honest look at life during WWII. Vivid detailing holds the reader’s attention as the characters navigate the dangers in Nazi-occupied France, which isn’t the typical locale for many books of this genre. There is a perfect mix of danger and romance. Sharp dialogue and likable characters combine to bring history to life. The story, particularly the ending, is thoroughly enjoyable. The author note provides a lot of information that history buffs will appreciate. 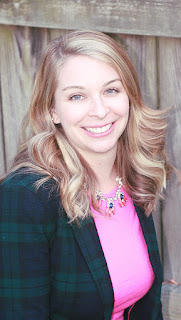 Believing she was born in the wrong era, J'nell Ciesielski spends her days creating heart-stopping heroes, brave heroines, and adventurous exploits in times gone by. Winner of the Romance Through the Ages contest and Maggie Award, J'nell can often be found dreaming of a second home in Scotland, indulging in chocolate of any kind, or watching old black-and-white movies. Born a Florida girl, she now calls Virginia home,a long with her very understanding husband, young daughter, and one lazy beagle. Find out more at http://www.jnellciesielski.com/

a Rafflecopter giveaway
Posted by Leslie at 3:12 AM