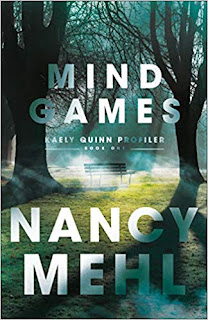 I'm ending the year with a bang for my final Friday Reads post of 2018.

Kaely Quinn's talents as an FBI behavior analyst are impossible to ignore, no matter how unorthodox her methods. But when a reporter outs her as the daughter of an infamous serial killer, she's demoted to field agent and transferred to St. Louis.

When the same reporter who ruined her career claims to have received an anonymous poem predicting a string of murders, ending with Kaely's, the reporter's ulterior motives bring his claim into question. But when a body is found that fits the poem's predictions, the threat is undeniable, and the FBI sends Special Agent Noah Hunter to St. Louis.

Initially resentful of the assignment, Noah is surprised at how quickly his respect for Kaely grows, despite her oddities. But with a brazen serial killer who breaks all the normal patterns on the loose, Noah and Kaely are tested to their limits to catch the murderer before anyone else--including Kaely herself--is killed.

If you’re a fan of shows like Criminal Minds or FBI (or just love a good psychological thriller), then you’ll want to add this book to your TBR pile.

This is the first book in a new series, and the suspense starts from the prologue. The poem from the killer after Kaely adds a nice “creep” factor to the story. Vivid detailing pulls the reader in, and the twists and turns keep the reader guessing. Procedural details are on point, and it’s obvious Mehl did her research, which makes her serial killer even more disturbing. Kaely Quinn is a multilayered heroine, and I look forward to reading more of this series.

There is a Christian element, as well as a romantic one, but neither is overwhelming. The suspense is definitely the star.

Nancy Mehl is the author of more than thirty books, including the DEFENDERS OF JUSTICE series. Nancy writes from her home in Missouri, where she lives with her husband,Norman, and their puggle, Watson. To learn more, visit NancyMehl.com.
Posted by Leslie at 6:18 AM