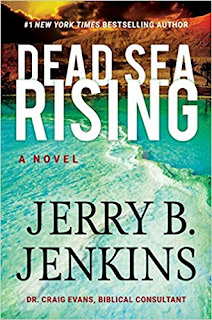 I enjoyed the Left Behind series, so I was excited to read the latest from Jenkins.

Nicole Berman is an archaeologist waiting to hear back on her request to dig in Saudi Arabia. She is sure there’s a secret waiting to be uncovered that can alter what people believe about religion and history. Her plans change after her mother is attacked, and an investigation ensues as to whether or not it was a murder attempt. Could it be connected to Nicole and her potential dig?

Terah’s son Abraham is born, and the readers see him battle between the God his rulers follow and the God his wife believes in. He struggles to make life-altering, and sometimes painful, decisions.

I found the premise interesting and the mystery solid. Characters are well-developed. I like the timeslip feel of the book, though there wasn’t as much of a connection between the two time periods as is normal in books of this genre. Chapters alternate between Biblical and present day, though a few chapters are flashback chapters to Nicole’s father’s time in Vietnam. The present-day story line seemed to progress much more than the Biblical one, and I found it easier to connect with and a bit more interesting. Many chapters were short, which kept the pace of the story active. The various time periods set up things for the next book. I’m interested in how Jenkins will bring everything together, and I look forward to reading the sequel.

Disclaimer: I received a complimentary copy as part of the FaithWords blogger program, but I wasn't required to leave a positive review.