"An Imperfect Promise" by Kari Trumbo 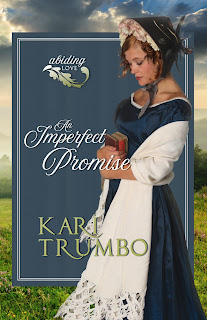 
The early-evening glare of the sun made looking into the water like trying to look into the sun itself. Farther up the stream, he spied something bright, shiny…and red.
It had only been an hour or so since she’d been at his farm, yet it could’ve been a year for how his heart raced. He approached slowly, not wanting to disturb her. She probably had so few quiet moments. But he couldn’t just leave her. It wasn’t safe for her to be sitting out alone, and he could no more ignore her than he could make the river flow backward. He lifted his foot high and slammed it down on a dry twig to alert her to his approach. She stiffened, her head still nestled against her knees.
He walked toward her and waited for an invite to sit. She smiled but said nothing.
“Good evening. I didn’t think I’d get to see you twice in the same day.” The glistening trail under her eyes should’ve made him want to run, but instead he wanted to pull her into his arms.
She frowned and inspected the grass next to her. That was as much of an invitation as he was going to get. He gave her more space than he wanted to, dropping down and reclining on his elbows in the grass.
“Now, don’t tell me you’re down here shedding tears over Dallas?”
Her visit an hour before had taught him she wouldn’t come right out and say what was bothering her, but maybe he could find out if he pressed a little.
She shook her head but would not speak.
“Not Dallas, huh? Hmmm. Did one of the kids get into your stash of sweets?”
She turned away from him, pressing the side of her head into her legs, hiding from him.
“No sweets? For shame. Well, I’m afraid I’m stumped. Care to share with me why you’re hiding down by the river? We just talked, not an hour ago, about how it wasn’t safe to wander between the two houses alone. If anything happened to you out here, well…”
She whipped her head back to him, condemning him with her narrowed eyes, breathing shallow puffs as she fought the tears spilling over. “Well…what? You might have to go after Esther to get our land? A little less sure of yourself with that prospect? Did you think because I’m so plain that I would be an easy target?” A huge tear coursed its way down her cheek.
John reached over and wiped it away with his thumb. His heart skipped when she closed her eyes and leaned into his touch as if she craved the contact like he did.
“Gini, I don’t believe a word of that, and you shouldn’t either. I got more land and more trouble than I know what to do with. I don’t need anyone else’s, and I don’t want no one else’s. Truth be told, no one has talked to me about any such thing, so it’s all gossip. What I was going to say is this: if something happened to you, I would blame myself, and I might be tempted to do a little undeputized investigating. I’m tired of people hurting my family.” 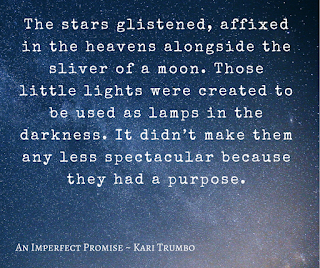 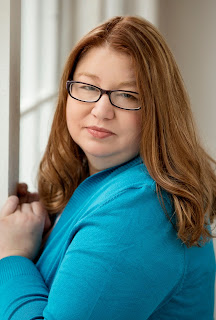 Kari Trumbo is a best-selling author for many Christian Historical Romance novels and is a stay-at-home mom to four vibrant children. When she isn't writing, or editing, she home schools her children and pretends to keep up with them. Kari loves reading, listening to contemporary Christian music, singing when no one’s listening, and curling up near the wood stove when winter hits. She makes her home in central Minnesota with her husband of over twenty years, two daughters, two sons, two cats, and one hungry wood stove.