"God Bless the Broken Road" by Jennifer Dornbush ... and a GIVEAWAY! 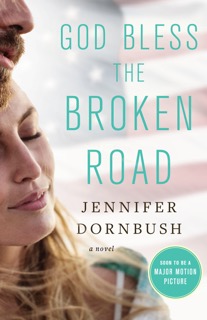 Jennifer Dornbush has graciously offered to give away a paperback copy of this new release. You can enter by using the Rafflecopter link at the end of the post. (Giveaway ends November 17, 2017. If you are the randomly chosen winner, I'll contact you and pass on your information.)

God Bless the Broken Road is a heartwarming story about a grieving army widow who finds her way back to her daughter, her faith, and a new love. Amber Hill never imagined she would find herself a war widow and single mom. She feels robbed and is angry at God, and she doesn’t know how to help her nine-year-old daughter Bree through her grief. Where, Amber wonders, are the Sunday dinners, the picnics, the bike rides, the time together they should be enjoying as a family? Instead, Amber is left with a folded flag and an empty heart.

Cody Jackson has a death wish. Or at least that is what his manager thinks, as Cody pushes his race car and his luck in every race. Is he hiding something, or just daring God and other racers to end the path of destruction he finds himself on as he rounds the last turn? When Cody encourages Bree to join in a Derby car race for local youth, she finds a way to channel her grief into something good—and she likes that her mom and Cody are starting to become friends—or maybe something more.

Cody invites Amber and Bree to see him race, but as they watch Cody narrowly escape a devastating crash, she realizes she can’t lose another person in her life. It’s better to be alone than feel that type of grief again. But when Amber hits rock-bottom, she cries out to God and asks for help. With her faith, her life, her family, and her heart hanging in the balance, Amber is forced to decide between the broken road she knows so well and trusting that God will provide a new path.  Based on the Rascal Flatts song, God Bless the Broken Road is a moving, heart-stirring story about the power of faith to change a life.

What inspired this novel?
God Bless the Broken Road (GBBR) actually began as a feature film script three years ago. My friend and director, Harold Cronk, who is best known for the God’s Not Dead movies, called me one fine summer evening. He pitched me the seed of the idea and asked what I thought. I said I thought it sounded like a solid story. And then he asked if I wanted to write it with him. Of course, I said yes.

We finished the first draft of the script on Christmas Eve, 2014. Over the course of the next year we refined it while the producers rallied the funds. In the spring of 2016 Harold shot God Bless the Broken Road.

A few months earlier, as we finished the script version, I talked with the producers about penning a novel version. They thought it would be a great idea. So my agent, Julie Gwinn, put a pitch together, and while we were filming, I quickly wrote the first three chapters. Within two weeks Julie had procured a couple contracts. We happily chose Simon & Schuster. I spent last summer scribing the novel, and here it is a year later.  The film version is also “in the can” as we say and will be releasing in 2018.

What do you hope your readers take away from this novel?
When we were writing the script, the top two takeaways we kept in mind were first, that God is always with us, even if we don’t feel like He is or aren’t seeking Him actively. He is always there, and He is always providing us with amazing blessings, even when/if we don’t acknowledge them. One of the keys to healing and hope on our broken roads is to turn our gaze to Him so that we can start to recognize Him along the path. When we turn to Him and humble ourselves, He can start to guide us and shape our brokenness into blessing.

The second takeaway that was important to us as we wrote this story is community. My signature hash tag is #ConnectContributeBelong. I’m huge on the importance of building actual, physical community (not just having virtual community). We don’t have to travel our broken roads alone. God has given us friends and family to lean on for support and encouragement. This can make a huge difference when we are going through trying times. I think so many people suffer from depression and suicide because they think they are alone. Mother Theresa said the greatest poverty we have today is the feeling of loneliness because we have forgotten that we belong to each other.

So many people feel like this. They feel alone. They feel that no one understands or cares what they are going through. What a travesty. It’s so simple to be there for someone. You don’t have to be a professional counselor or therapist to help someone heal from a wounding. Sometimes the very best thing is to just to take a moment from your day to pause, listen, and lend a hug or word of encouragement.

On the flip side, if you are traveling a broken road it can be difficult to let people in to your pain. We see this in GBBR in the character of Amber, who lost her husband in Afghanistan. It takes a lot of courage to be vulnerable and ask for help. But here’s the secret … people love you and want to help you and be there for you. Amber eventually hits bottom in order to find this out and finally surrenders. It’s at that moment when her life starts to really find hope and redemption.

Needing to be loved and cared for is not a sign of weakness. It’s the way we humans need to relate to one another to build real and lasting communities.  By the way, building community this deep requires that you get off social media, look up from your phone, and have actual human contact! Just sayin’…. 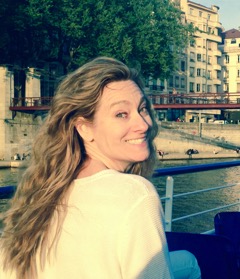 Where you can find Jennifer online:

Pintrest:
https://www.pinterest.com/jenidornbush/
a Rafflecopter giveaway
Posted by Leslie at 4:30 AM