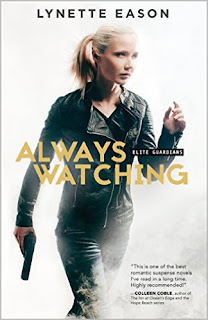 Wade Savage has a thriving career as a psychiatrist and radio host. He also has a stalker who is getting bolder. Unbeknownst to Wade, his father hires a bodyguard from Elite Guardians, Madelyn McKay. When Madeleine is attacked, and almost killed, on duty, her coworker Olivia Edwards takes over. Wade is not thrilled to have a bodyguard, but he accepts it after he is attacked, which is a huge step up from the weird gifts and hang-ups which had been occurring. Wade stirred things up with the stalker when he announced on air that he had thrown out the gifts. Now, it appears that the stalker will settle for nothing short of his death. As the danger increases, so does Olivia’s attraction to Wade. Will she be able to keep him alive and save her own heart in the process? Is Wade’s stalker a lonely, hurting caller, or is it someone who has outsmarted everyone?  This is the first book in Eason’s new series, “Elite Guardians.” There is more suspense than romance, and the fast pace makes it difficult to put down. The story keeps you guessing right up to the end because just when you think you have it figured out, Eason throws a curveball!

Disclaimer: I received a free copy from the Revell Reads blogger program in exchange for an honest review. I did not receive any compensation for my review.

Lynette Eason grew up in Greenville, SC. Even as a young girl, she knew she wanted her life to reflect the love of Jesus Christ.
After graduating from the University of South Carolina with a Business Degree she used for a very short time (sorry Mom and Dad), she moved to Spartanburg, SC to attend Converse College where she obtained her Masters degree in Education. During this time, she met the man she would marry—the boy next door!
She is married to Jack Eason, who speaks, leads worship, and consults ministries around the country. They have two children.
Lynette’s books have appeared on the ECPA and CBA bestseller lists and have won several awards.
* Too Close to Home – 2011 Inspirational Readers Choice Contest WINNER
* Don’t Look Back – 2011 Carol Award Finalist
* A Killer Among Us – 2012 Inspirational Readers Choice Contest finalist
* When the Smoke Clears – Romantic Times 4.5 Stars, 2013 ECPA 2013 Book of the Year Finalist, 2013 Selah Award Finalist
* When A Heart Stops – 2013 Carol Award WINNER
* When A Secret Kills – 2013 Line Award Finalist
Some of Lynette’s favorite authors who influenced her writing include, Brandilyn Collins, Dee Henderson, Shirlee McCoy, Karen Kingsbury, Robert Liparulo, Terri Blackstock and Deborah Raney.
Lynette is a member of RWA (Romance Writers of America), FHL (Faith, Hope, and Love) and ACFW (American Christian Fiction Writers).
Lynette thanks God for giving her the talent and desire to spin stories that bring readers to the edge of their seat, but most importantly, to the throne of Christ.
Posted by Leslie at 7:59 AM