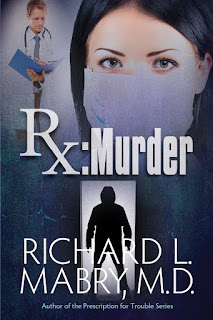 Dr. Mabry has graciously offered to give away  two (2) autographed copies of  "Rx Murder". In order to be entered, go to the Rafflecopter giveaway link at the bottom of this post. The last day to enter is August 14, 2015. If you are chosen as one of the two winners, I will be in touch to get your mailing address to pass along to Dr. Mabry. (US residents ONLY.)

A Word from Dr. Mabry…

Almost every story I write has an inciting incident, from my hometown experiences that led to Code Blue to idle thoughts on the loneliness of a parking garage that presaged Stress Test. However, my novella Rx Murder was written to plug a gap. Having changed publishers, there was a year's hiatus between my novel Critical Condition and my forthcoming one, Fatal Trauma. To remind people I'm still around, I wrote and self-published Rx Murder. Responses to the work have been good, and I'm pleased.

I was honored to have the opportunity to interview Dr. Mabry in September, 2014. We discussed a number of things, including this novella and his May, 2015 (traditionally published) novel, Fatal Trauma. In addition to my review, I'm posting the interview link below. 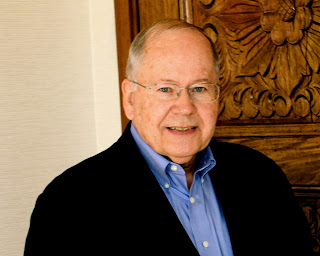 I'm a retired physician who got into non-medical writing after the death of my first wife with my book, The Tender Scar: Life After the Death of a Spouse. I'm gratified that it continues to help those who have lost a loved one.

Then came Stress Test (also a finalist for Romantic Times' Best Inspirational Novel). My next book, released in October, 2013 by Thomas Nelson Publishers, was Heart Failure. The most recent is Critical Condition, which was released in April, 2014.

I'm pleased to announce that Fatal Trauma was published on May 19, 2015, with more to follow. Further, I've just self-published a Christian fiction novella, RxMurder, which is currently available.

When I'm not writing, I'm busy being a husband and grandfather, working on my golf game, and doing the hundred-and-one other things that retired people do. I'm busier now than I ever was while in practice — and loving it.

Readers can find him online at:

a Rafflecopter giveaway
Posted by Leslie at 7:30 AM