Takeover Thursday with Janet Chester Bly ... and a GIVEAWAY! 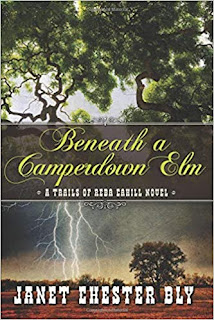 The author has agreed to give away one print copy of this book(US ONLY) or a pdf copy. You can enter by using the Rafflecopter link at the end of the post. (Giveaway ends August 1, 2019. If you are the randomly chosen winner, I'll contact you.)

BENEATH A CAMPERDOWN ELM, Book 3, Trails of Reba Cahill Series

What mystery lurks under an old Scottish elm?

Reba’s scary stalker is locked up in jail.
She finally snatches a rancher fiancé.
Her runaway mother returns home.
Reba has everything she ever wanted.
But Grandma Pearl has disappeared!
Is Reba about to lose it all?
Three generations of women
travel separate journeys of the heart.

Don Runcie might as well have beaten Reba with a tire iron and left her for dead. The effect wrenched the same. Her joy wadded up in a bloody rag at her feet.
“Reba Mae,” Jace began and stopped.
A gust of wind dashed over them, whipping Reba’s hair and spinning ground debris like devil dust. She swiveled her shoulder into it as a loud crack and crash thundered directly overhead and zigzags of light splayed.
Jace muttered something.
Reba turned the mare, tried to ignore him, and shut out the whole world.
Jace shouted through the storm. “I think we just got offered a job.”
“On our own ranch.” Reba spit the words out. Growing rage tromped up her spine like steel. “I should have asked him where Grandma Pearl is. He seems to know much more than anyone what’s going on around here.”
She tried to settle the mare as lightning snapped again over the canyon. She clutched the horse’s mane as hard, muddy raindrops pelted her face. The storm flare outside matched her inward churn.
“Shouldn’t we head home?” Jace hollered into the downpour.
Home?
Where was home?

It’s August 1991. Reba Mae Cahill brims with joy. Her life’s perfect. She’s finally bringing her prodigal mother, Hanna Jo, home to Road’s End from a Reno mental institute. With them is Jace McKane, her fiancé, who promises to help fight the unjust lawsuit that threatens the family ranch. He wants a new start, away from his unscrupulous father and all his drama.
Just as Reba’s getting Jace trained to become her rancher husband, she discovers Grandma Pearl betrayed her once again, in a way that also harms her mother. Reba believes she’s lost everything—her career, her identity, her lifelong pursuit, and her main reason for marrying Jace.
When Jace returns to California to bail out his father and pursue Quigley, a psychotic killer, who escaped from prison, she wonders if he’ll ever return to Road’s End?
Then Hanna Jo claims she sees alleged wild horses in the mountain valleys as she learns her son and ex-husband’s fishing boat sank in an Alaskan sea. Can Reba keep her from flipping out for good?
As Grandma Pearl struggles with guilt, health issues, and finding purpose for the rest of her life, will the new church building project provide an answer?
Meanwhile, twenty-one-year-old Scottish twin tourists, Archie and Wynda MacKenzie, mesmerize the town with their trick biking skills and charming accents. Reba’s not sure they’re all they claim to be. And someone harasses Reba with letters and phone calls. What are they really after?
Will any of the answers be found beneath the Camperdown Elm?

A contemporary western romance with a zing of mystery.

This is the third book in “A Trails of Reba Cahill” series, and it’s the first book I’ve read by this author. While the book could be read as a standalone, I think it could benefit the reader to start from the beginning of the series to gain a greater appreciation for characters and their charming small town.

Scenes are nicely detailed and grab the reader’s attention, and the character development is strong. While the characters are likeable, there are a number of them, making it hard to follow and keep track of everyone at times. It’s easier to focus on the lead characters. Grandma Pearl is probably my favorite character. Some of the antics in the story are hilarious, and God’s grace is evident and woven throughout. 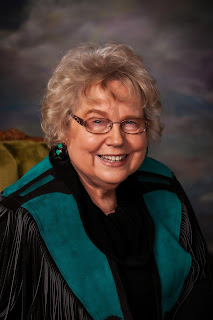 Born in Visalia, California, Janet Chester Bly received her Bachelor of Science degree from Lewis-Clark College in Literature & Languages and Fine & Performing Arts. She is a city girl with a country heart who doesn’t corral horses, wrangle cows, or even mow her own lawn.

She followed her late husband, Christy Award winning western author Stephen Bly, to country living in north-central Winchester, Idaho to write books and minister to a small town church. When she lost him, she stayed to manage Bly Books online and through the mail. She also rakes lots of Ponderosa Pine needles and cones and survives the long winters, one snowstorm at a time.
She authored and co-authored with Stephen 40 fiction and nonfiction books for adults and kids 8-12 years old.

Check out her website for more info about the Blys and their books and the blog stories behind the stories: www.BlyBooks.com
Her email: janet@blybooks.com
Twitter: https://twitter.com/BlyBooks
Facebook: https://www.facebook.com/BlyBooks/

a Rafflecopter giveaway
Posted by Leslie at 1:27 AM