"Beneath the Summer Sun" by Kelly Irvin ... and a GIVEAWAY! 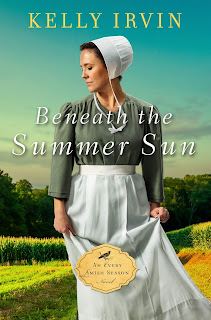 Kelly Irvin has graciously offered to give away a copy of her new release. You can enter by using the Rafflecopter link at the end of the post. (Giveaway ends January 26, 2018. If you are the randomly chosen winner, I'll contact you and pass on your information.)

The idea for Beneath the Summer Sun and the series around which it is built came from reading an Amish scribe’s blurb in the newspaper The Budget. The scribe gave annual statistics for her community that included births, deaths, weddings, number of adults, number of children, number of baptisms, number of graduates from school, and number of widows/widowers. The number of widows and widowers was important enough for her to include in her summary. That made me wonder how widows are integrated into a society that is centered around husband-wife family units.
From that seed, I developed a proposal for a four-book series. I wanted to explore the lives of Amish women and how it must be different to be a widow at twenty and at seventy. Beneath the Summer Sun is the second in a four-part series that examines those seasons in life. The first book, Upon a Spring Breeze, follows the story of Bess Graber, a young, pregnant newlywed who finds her life irrevocably changed after a terrible tragedy.

In Beneath the Summer Sun, I delve into Jennie Troyer’s life as a thirty-something widow with seven children. The third book centers around a grandmother and the fourth book, a great-grandmother.
Jennie is encouraged by her community to remarry, but she resists. She’s afraid of committing the same mistake twice. How can she trust her feelings when they led to her first marriage to an abusive husband?

Domestic abuse in Amish marriages is an anomaly, but the idea that it does sometimes happen made me want to explore the reactions and repercussions. The Amish don’t believe in divorce. Their vows are sacred and unbreakable. They believe that there’s nothing that can’t be forgiven. They also prefer to have as little contact as possible with the English legal system. Given those three facts, what happens when a woman goes to her bishop to seek relief from an abusive husband?

In The Amish by Donald Kraybill, Karen M. Johnson-Weiner, and Steven M. Nolt, the authors note that sexual abuse and domestic abuse likely result in the same challenges for the Amish, including the reluctance to report them to outside authorities. “Abuse is typically reported to church leaders, who are always male. Because the church, family, and community are knit together and the authority structure is patriarchal, male leaders may not be sensitive to the needs of female victims. Men may minimize the acts of a male perpetrator or blame female victims for the violations.”

The authors also touched on an article from Family Life in the mid-1990s when a group of Amish women calling themselves the Sewing Circle collected stories of domestic violence and printed them in a booklet to raise awareness of the problem. This bolstered my belief that there are Amish women who will stand up for themselves in these situations and reach out to others to help them heal.
We tend to over-simplify the lives of Amish families, and The Amish reminded me that these folks are human and face some of the same challenges and issues that we do in English society. Beneath the Summer Sun delves into one woman’s life and how she overcomes her fears. She learns that she deserves to be happy. She learns to be brave and grasp her second chance.

It’s a difficult topic and not one we find often in Amish romances, but I want to explore all facets of love and life, not just the easy, simple, sweet ones. I believe readers will be touched by Jennie’s story and there are those women who will see themselves in Jennie’s situation. It’s my hope that they’ll find some measure of healing and hope in her story.

Jennie Troyer knows it’s time to remarry. Can she overcome a painful secret and open her heart to love?

It’s been four years since Jennie’s husband died in a farming accident. Long enough that the elders in her Amish community think it’s time to marry again for the sake of her seven children. What they don’t know is that grief isn’t holding her back from a new relationship. Fear is. A terrible secret in her past keeps her from moving forward.

Mennonite book salesman Nathan Walker stops by Jennie’s farm whenever he’s in the area. Despite years of conversation and dinners together, she never seems to relax around him. He knows he should move on, but something about her keeps drawing him back.

Meanwhile, Leo Graber nurtures a decades-long love for Jennie, but guilt plagues him—guilt for letting Jennie marry someone else and guilt for his father’s death on a hunting trip many years ago. How could anyone love him again—and how could he ever take a chance to love in return?

In this second book in the Every Amish Season series, three hearts try to discern God’s plan for the future—and find peace beneath the summer sun. 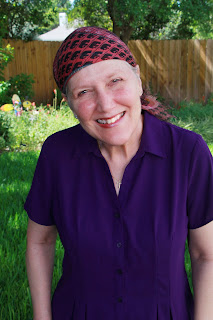 Kelly Irvin is the author of Upon a Spring Breeze, the first book in the Every Amish Season series from Zondervan/ HarperCollins. It follows the Amish of Bee County Series, which included The Beekeeper’s Son, subject of a starred review from Publisher’s Weekly, calling it “an intricately woven masterpiece.” Among her other works are novellas in three collections. She is also the author of the Bliss Creek Amish series and the New Hope Amish series, both from Harvest House Publishing. She has also penned two inspirational romantic suspense novels, A Deadly Wilderness and No Child of Mine.

Kelly is currently working on the third novel in the Every Amish Season series. Additionally, she is contracted for novellas in two anthologies to be published by Thomas Nelson in 2018 and 2019. She recently announced that she has signed a contract with Thomas Nelson for two romantic suspense novels. The first one, Tell Her No Lies, will debut in January 2019.

The Kansas native is a graduate of the University of Kansas School of Journalism. She has been writing nonfiction professionally for more than thirty years, including ten years as a newspaper reporter. She recently retired after working twenty-two years in public relations for the City of San Antonio Parks and Recreation Department. Kelly is married to photographer Tim Irvin. They have two young adult children, two grandchildren, and two ornery cats. In her spare time, she reads, blogs, and writes articles on being a cancer patient for Cure Today Magazine.

Where you can find Kelly online...

a Rafflecopter giveaway
Posted by Leslie at 4:00 AM