"No One to Trust" by Melody Carlson 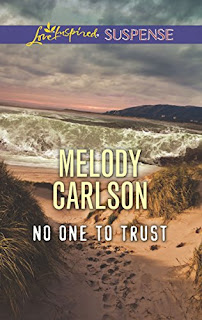 For this "Friday Reads," I'm highlighing No One to Trust by Melody Carlson, a new Love Inspired Suspense release (March 8, 2016). Here's an excerpt:
***
The guy had a gun trained on the woman Jon had seen earlier.

"Call off that dog!" the man screamed at Jon.

"Come here, boy," Jon said with authority. His tail between his legs, Ralph slowly approached and Jon scooped him up. The little dog's body was tense, as if on high alert, as if something was still very wrong.

"Now get outta here!" the guy yelled, waving his weapon.

The frightened woman watched Jon with a tear-streaked face. He knew he needed to do something — but what?

"I warned you!" The man look flustered and agitated — as if trying to make up his mind. Probably deciding which one of them to shoot next.

In that same split second, Jon looked at the woman and made his decision. "Run!" He yelled at her.

As the man with the gun turned to the woman, Jon sprang at him and knocked him flat onto the gravel road, making the revolver fly from his hand.

You can read my review in the March 2016 issue of RT Bookreviews Magazine or at the following link...
http://rtbookreviews.com/book-review/no-one-trust-1
(I rated it 4.5 - TOP PICK/5 stars.) 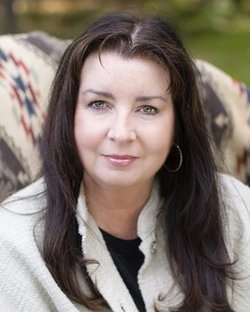 Melody Carlson has written more than 200 books (with sales around 6.5 million) for teens, women, and children. That's a lot of books, but mostly she considers herself a "storyteller." Her novels range from serious issues like schizophrenia (Finding Alice) to lighter topics like house-flipping (A Mile in my Flip-Flops), but most of the inspiration behind her fiction comes right out of real life. Her young adult novels (Diary of a Teenage Girl, True Colors, etc.) appeal to teenage girls around the world. Her annual Christmas novellas become more popular each year. She's won a number of awards (including Romantic Times' Career Achievement Award, the Rita, and the Gold Medallion) and some of her books have been optioned for film/TV. Carlson has two grown sons and makes her home in the Pacific Northwest with her husband and yellow Lab dog. To find out more about Melody Carlson visit her website at http://www.melodycarlson.com/